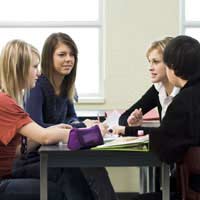 Conjugating verbs is the bane of every schoolchild's life. And for adult language learners, it is nit much fun either. Learning tables and tables of verb endings is really the only way to do it when you are learning a language later in life - this is why children find language learning easier as they can be spoken to in it and pick it up as with a native language. The verb endings then come naturally to them and they do not make mistakes.

Unfortunately, for adults, the way we learn to conjugate verbs has many pitfalls. Because we learn them parrot fashion, there is always the danger that we will remember them wrongly as we do not have the advantage of the endings of words coming naturally. Exceptions to the rule are also another common pitfall.

Most verbs, especially in the Romance and Latin based languages, take one of several endings, which can then be learnt for all verbs in that ending group. However, there will always be exceptions - verbs that do not fit into any of these groups. And unfortunately, they can often be the most commonly used verbs, such as 'to be' and 'to have'. But there is a positive side to this - because they are used so often, you will learn them before very long at all.

The standard endings for verb conjugation will vary between languages. But, some of the most common ones which you will come across will be the endings for 'I', 'you', 'he/she/it', 'we', 'you (plural)' and 'they'. In some verb groups, the endings for words will be the same for some of these endings, in others they will be totally different. So it is always best to write down all of the endings for each pronoun and learn them all, even if some are the same. Of course, depending on the language, there will be other pronouns to include in the table. For example in Spanish, there is the 'usted' class which is used to refer to 'you' but as a very formal way of doing so. This too must be learnt along with the other endings.

As touched upon the previous sections, all languages will have some verbs which cannot be conjugated to conform to any rules you have learnt. Some of these may be obscure and therefore could well trip you up when you come across them. However, the main words which are exceptions in most languages are 'to be' and 'to have'. These two verbs do not conform to any rules at all and are extremely irregular certainly as far as the main European languages go. But you will use these words to build up different tenses and to construct phrases as well as for the simple actions of being and having. Therefore, before long, you will not even have to think about how to conjugate them as the relevant endings will come naturally.

Conjugating verbs is one of the most basic facets of language learning. There is no possible way of getting around it as verbs are used in every sentence. And unless you plan on saying and writing every single sentence in the first person singular, the endings for all the other pronouns will have to be learnt. But any teacher and every textbook will give you verb tables to learn, and when you start to look at them on a regular basis, you will soon start to allow the patterns to flow naturally.