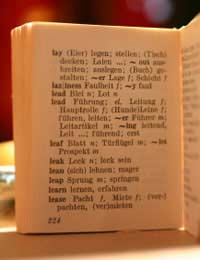 A curious anomaly of foreign language for most English speakers is gender. Gender is the concept that all nouns can be masculine, feminine or neuter. This means that the pronoun each word is given changes depending on its gender. Even the most fluent speaker of a foreign language can be tripped up by gender, as to learn the gender of all words could take a lifetime, depending on the language.

Some languages, such as English, have no gender classes. Others, like French and Spanish, have two, while others, like German, add neuter to make three. Learning the gender of a word is vital to being able to speak the language well, as the gender impacts on several other aspects of language, such as pronouns and adjectives.

Some languages determine gender based on the ending of the word. Spanish and Italian are prime examples of this. In Spanish, a noun that ends in ‘a’ is usually feminine, while one which ends in ‘o’ is masculine. These languages are the easiest for people to pick up gender because the word endings act as a kind of signpost. Of course, as with everything in language, there are exceptions, and with the words that do not conform to the rule there is no other option but to learn them by heart.

Other languages are not so easy. There is no real way of knowing what gender a French noun is other than to learn it off by heart. French nouns do not conform to a pattern and can end in any letter, so, for example, there is no real way of knowing whether ‘table’ is masculine or feminine other than to learn that it is in fact, ‘une table’ and thus feminine.

Gender impacts on the way other words are used in the same sentence. Pronouns are the most obvious example of this. In English, we usually just use one pronoun for all nouns, so ‘the’ or ‘a’ fits the bill in most cases. But in languages which use gender classes, the pronoun changes depending on the gender of the noun. So in French a word can be either ‘un’ or ‘une’ or ‘le’ or ‘la’ – or even ‘l’’ if the noun begins in a vowel. In German, there are three classes of pronoun, either ‘das’, ‘die’ and ‘der’, so there is even more reason to make sure you know the gender of a word.

But it does not affect just pronouns. Adjectives and other words, which are used to apply to the noun also must agree with the noun. In many languages, this means changing the ending of the adjective to agree with the gender of the noun. In French, the adjective will usually take an ‘e’ on the end for a feminine form, although this obviously depends on the word itself. Again, there are exceptions to this rule, which just need to be learned off by heart.

Gender might seem like a daunting concept if you are new to language, but once you start to learn, you will find it comes more naturally. Obviously, languages like French are harder for the beginner because there are no real rules to knowing whether a noun is masculine or feminine. But the words that you use often will become ingrained in your memory and the only problems will arise when using a word, which does not crop up often in conversation.

Thankfully, gender does not usually impede understanding, so, as long as you use a word in the right context, your meaning will still come across even if you use the wrong gender – unless the word has two meanings, one with each gender. The only other thing to be aware of is if you speak a few languages – it does not follow that what is feminine in French will be so in Spanish. But practice lots and gender will start to feel as natural a part of grammar as all of the concepts present in English too.