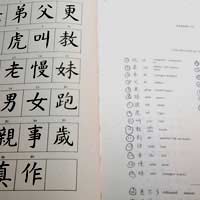 The history of Mandarin Chinese is not as easy to trace as the histories of most European languages. For a start, Mandarin Chinese can refer to the official language, which uses the dialect spoken in Beijing, or it can mean the multitude of dialects spoken elsewhere in the country. There are many different dialects and that is only for Mandarin Chinese. Cantonese has many more as well. Most people who speak the languages and dialects only consider themselves a Mandarin speaker if they speak the standard form of it, otherwise they will name their language as the precise dialect they use.

Until the 20th century, there was no standard Chinese language that everyone could speak and which would be used for official purposes; rather, everyone just used their own regional dialects. The official language of Mandarin Chinese did not really come into being until the Republic of China was created in 1912.

This is not to say, however, that Mandarin is a recent invention. In the form it persists in today it is a fairly recent development. But Mandarin as a language, or historical Mandarin, was used at least as far back as the 19th century, by ministers in court and the upper classes, especially in Beijing. The basic vocabulary and grammar structures between this historical Mandarin and modern Mandarin were the same, the difference came in the amount of formal terms which littered historical Mandarin, which have disappeared today, despite Chinese culture still being a very formal one compared to Western culture.

Standard Mandarin is now the language that is taught in schools and which official documents are in. Thus, the vast majority of Chinese people understand the language even if they use another dialect or language when at home. The one exception to this is Hong Kong. In Hong Kong, because of its British history, English is still widely spoken. Also, where people speak Chinese, they usually speak Cantonese as they have not yet been a part of China long enough to fully submerge their systems in the Mandarin ways.

Because of the age and history of the Chinese dynasty and China itself, it is somewhat surprising that the history of Mandarin Chinese is less illustrious. But when one considers the vast size of the country, it is of little wonder that the people who live across it grew up speaking such widely differing dialects that they are almost different languages. But now, a visitor to China learning mandarin Chinese should have little trouble making themselves understood wherever in the country they go -apart from Hong Kong, where English is so widely spoken you will be able to get by with that.