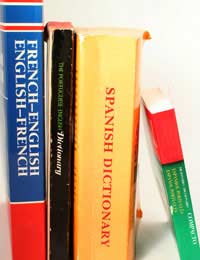 Shape shifting, in language terms, has nothing to do with metamorphosing oneself into a different shape, as it would do in science fiction movies. But it is an interesting concept and one that any person new to a language will need to get a hold on. In all languages, words can shift their shape, depending on many factors. One word, for example, to write, can then be turned into lots of different words - wrote, writes, written, writer. Or even simple nouns, such as house, can be changed to houses, and even houseful. In this way, the same stem of the word takes on a slightly different meaning. The basic idea remains the same, but the word changes depending on who is doing it, what is being done to it, how many there are, when it was done. This is shape shifting.

Verbs shape shift all of the time, although when they are conjugated, their meaning remains the same. So, a new speaker of a language not familiar with shape shifting could forget to conjugate a verb and still be understood – as if in English, a new speaker said ‘I is’ rather than ‘I am’. However, it will mark you out instantly as a novice, and to speak the language at all well, you will need to know how to conjugate verbs.

In most languages the verbs shift their shape depending on who is doing the action – and tense, but this will come later on. Therefore, you could end up with a different word for each of the cases, I do, you do, he does, they do, you (plural) do, we do. In some cases you will find that these are the same, and thankfully, in most languages, there are a set pattern of rules which verbs follow.

The tense of a verb, or when it is happening, also affects shape shifting. But in the case of tenses, your meaning may become muddy if you do not correctly select the right word for the tense. Using the example from above, if you were to say I write to him, this would be interpreted as you do write to him, regularly. But if you meant to say I will write to him, the meaning is different. Of course, the basic meaning still comes across but there is room for confusion. Again, tenses follow a pattern in most languages, so learn this and you will be able to shift the shape of most verbs accordingly.

Of course, words also shape shift if you are talking about more than one of them, plurals. Again, some words are relatively simple to change, like in English, you would say one table, two tables. But some do not change the way you would expect, such as one man, two men. Each language is different, so learn the patterns here too.

Words shift in many other ways, and there are not patterns or rules for all of them. For example, many verbs can shift to become nouns – ride becoming the rider, for example. But, once you know the meaning of the stem of a word, you will be able to recognise it even after shape shifting and therefore work out what it means when you see it written down or hear it said. All languages shape shift in different ways, so the only way to get to grips with it is to be aware of how your language changes.