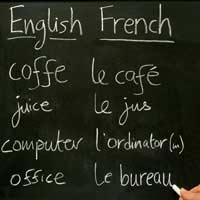 Word order is a tricky thing to get your head round for a beginner in language learning. Very few languages have the same word order, so people learning a new language will quickly find that sentences literally translated seem to have words jumbled up. For example, in a restaurant in France, you would say "Je me prends…" when asking for something. But keeping the words in the same order, the literal translation is I me take – what it actually means is, for myself, I will have.

For different languages, this order can vary again. In fact, some languages are even more confusing, because rather than have individual words and vary the word order, they make sentences by adding on extra bits of the verb to denote the person doing it, the tense and who they are doing it to and so on. Turkish is a good example of this. It means you can end up with a one-word sentence with the translation of several English words within it.

Although the example above uses French, French and English actually have every similar word order. They use subject, verb, object order, or SVO. That is, in English, we would say I go to the beach. ‘I’ is the subject, followed by the verb, ‘go’, and followed by the subject ‘beach’. Obviously this is a very basic example but it shows the basic idea. In French, the same sentence would be Je (subject) vais (verb) a la plage (subject). The differences between the two word orders, and indeed, word orders in other subject-verb-object languages usually comes with the smaller words, the prepositions, adverbs, adjectives and so on. However, it is easier for an English speaker to learn an other subject-verb-object language as a general rule.

Do not let this put you off learning a language that uses a different word order. As long as you are aware that the word order could be different and bear it mind when starting out, by the time you are becoming fluent it will be natural to use the word order of that language.The most common word order is subject-object-verb, as used by Turkish, German, Japanese and a whole host of other languages. However, there are languages for every possible permutation of the subject, object, verb ordering.

In addition, few languages only ever use one order, although most have a main order. But for emphasis, or in questions, the word order can change as well. Add in all of the smaller words and you will see why word order is such a big part of language learning. But once you are familiar with the language, you will know when it does not sound natural and when you have got the word order mixed up.

Word order is a big part of learning a language, and one that children struggle with because it goes against the grain when they are told the translation of a word to then put it in what they see as the wrong order. But as stated above, over time it will come naturally. If you do get the word order mixed up, you will still, more than likely, be understood by a native speaker. However, you will never be truly fluent unless you know where words go in a sentence and thus if you are aiming for a good degree of knowledge of the language, rather than just ‘getting by’, you should aim to get word order under your belt as soon as possible.