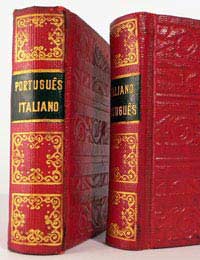 It is no surprise that Portuguese and Spanish are so similar when you look at the history of Portuguese. In addition, the geographical location of Portugal, on the edge of the Iberian peninsula, means that it should come as little surprise that Spanish had a massive influence and bearing on Portuguese. As a result, Portuguese is one of the main Romance languages - those that descended from Latin. It shares many sounds, grammatical structures and words with Spanish but it also a completely different language in many ways.

The language of Latin has played a large part in the history of Portuguese. In many ways, Portuguese is the closest living relation to Latin, even though, because of its location on the west of the Iberian peninsula, the Romans did not arrive in Portugal until they had conquered elsewhere in Europe. There were native languages in the region that is now Portugal but they were all but eliminated and modern Portuguese owes very little to these extinct languages.

After the fall of the Roman Empire, the land that is now Portugal was invaded by Germanic settlers, known as Barbarians, and later the Moors, who brought with them Arabic. Both the Germanic languages and Arabic started to contribute towards the language spoken in Portugal, but Latin still persisted above all else. Thus, the language of Portuguese, which was being formed, was coming from Latin interspersed with bits of Germanic and Arabic. Like in Spain, the Arabic influence is still in evidence in Portugal, towards the south of the country.

Portuguese in its Own Right

Portuguese in its own right dates as far back as the ninth century – even before Portugal, as a country, existed. The language was still very much tempered by Latin, but scholars have determined that the language from that period is undoubtedly Portuguese. The history of Portuguese proper begins in the 11th century when Portugal was made a country. It then evolved through Old Portuguese to the Portuguese that is spoken today, and not only in Portugal but in vast swathes of South America including Brazil.

All of this makes Portuguese one of the most spoken languages in the world. Although it does not have as many native speakers as Spain, it is not far behind and the history of Portuguese means that people in countries all over the world will be able to understand some words of Portuguese because of the shared roots between it and their languages.

Many of the Romance languages grew up in similar ways. Therefore, the history of Portuguese is not dissimilar to the history of other languages. But Portugal’s unique location, bordered by Spain on two sides and sea on two sides has meant that a number of settlers arriving both by land and by water have made their mark on the country, and inevitably the language. Vulgar Latin, that organic, original form of the language has had a lot of influence in this part of the world. Now, thanks to the reach of the Portuguese language far beyond Europe’s borders, the Roman Empire’s legacy also stretches across the oceans, touching people in far off, distant lands.