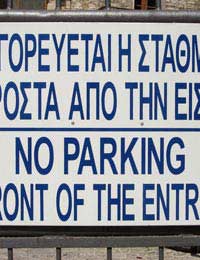 The history of Greek dates back a very long way. The language is one of the oldest, if not the oldest, in use today. It has a complex and varied history, spanning centuries and important discoveries and defining wars. Ancient Greece was one of the most advanced civilisations in the world and it is fitting that it had such an advanced and exacting language system.

Proto Greek is a language that experts suggest was spoken in Greece around 2,000 years before Christ. It is the last common language that all Greek dialects are descended from and is the direct ancestor of Modern Greek. Proto Greek became Mycenaean Greek over a period of several hundred years, which was the language of the Mycenaean civilisation, usually recognised as the first stage of the Greek language.

In ancient Greece, the people spoke ancient or classical Greek. There were three main dialects, Ionic, Aeolic and Doric, but they were all Greek. Which dialect was spoken was determined by which tribe the person belonged to and where in Greece they lived. Ionic Greek also had a sub-dialect called Attic Greek, which was the language of Athens (or Attica, as the Athens region is known). Much ancient Greek literature was written in Attic Greek.

The dialects were continued in use until the time of Alexander the Great. He wanted everyone to speak the same dialect so that his army could communicate across the whole of his empire with no confusion. This language became known as Hellenistic Greek.From this language, Greek spread rapidly, becoming the language of the eastern Roman Empire and becoming spoken by many hundreds of thousands of people and evolving quickly into the language it is today.

The Greek that is spoken today is generally seen as the fifth stage of the evolution of the language. It is known as Modern Greek and most scholars see the start of Modern Greek as the fall of the Byzantine Empire in the 14th century. Obviously, the language has still changed since then and is still changing today. Regional dialects are still in use, although there is much less variation between them than there was in ancient Greece.

Greek has since made itself known in numerous other languages across the world, especially in Europe. Many words, which are to do with science and academia are of Greek origin. The impact of the language of Greek can be seen everywhere, but most of all in universities and schools. All words pertaining to great Greek discoveries such as astronomy and philosophy, and indeed academic, stem from the Greek language.

The history of Greek is long and complex and it is impossible to describe it in any great detail in anything less than a book. But the above gives an overview of the way the ancient Greek language evolved and became the language it is today. Although Greek today is only really spoken in Greece and Cyprus and in significant Greek communities around the world, the history of Greek is such that it is one of the most important languages of the world.