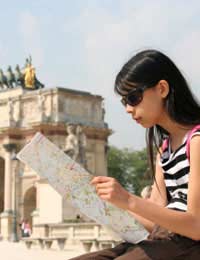 French is an incredibly widely spoken language right across the globe and it is good to know some common French phrases if you plan to visit any French speaking country. Most people learn at least a little French at school and many retain the basics, such as how to say hello and goodbye, yes and no. But there are other common French phrases, which may not have been retained or ever learnt which are a good addition to any vocabulary.

There are enough common French phrases, which will help the holidaymaker or business traveller get by. And French people are not always the most helpful when you are trying to communicate with them, so the better grasp you have on the language, the better off you will be.

Whether or not the person you are introducing yourself to speaks English or not, it is still nice to be able to introduce yourself in their language as this creates a good first impression. Here are a few common French phrases for doing just that.

Most places in France do have English speaking waiters and waitresses and many will actually address you in English if they know you are not French, even if you are a fluent French speaker, so do not be put off by this.

But it is still as well to know a few common French phrases for ordering your meal just in case the restaurant you dine in is the exception.

The menu in a restaurant will usually be in French. Often it will have an English translation alongside it but sometimes it will not. Therefore, it is useful to know a few common French phrases so you do not have to ask the waiter to translate.

In a big city such as Paris, it is useful to be able to ask for directions if they are needed. People can be abrupt and reluctant to stop and answer questions. Thus, if you can ask them the way in their own language, they will be more likely to stop and help you.

A few common French phrases can be time saving when you are there.

If you can learn most of these common French phrases, you should be able to muster the very basics of the situations you are likely to encounter in France or a French speaking country. If you cannot learn them all then memorise the most simple ones and write the rest down. You may feel a little silly but at least you know you will be able to ask for directions if you get lost.