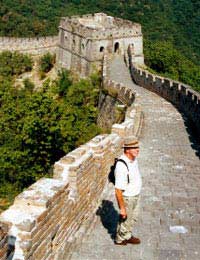 Mandarin Chinese is the official language of China. There are several other languages and dialects spoken there, including the popular Cantonese, but Mandarin remains the Government’s language of choice and is the language most widely spoken in Beijing.

Chinese, when taken in all its forms, is spoken by the largest number of people in the world – this is due to the sheer numbers of people who live in the country. And as China emerges as more of a world superpower – and one to watch in the future in terms of economies and business – it becomes more useful for Westerners to be able to speak a few common Mandarin Chinese phrases.

China is becoming a more tourist friendly place but is not yet a tourist hotspot and therefore there will be many occasions when the visitor encounters someone who does not speak English.

The Chinese language is represented to complicated pictograms but visitors need not worry as most signs and instructions are also written in Pinyin, the Chinese word for using our alphabet system to represent words. Most of the letters in Pinyin are pronounced as in English. The examples below all use Pinyin.

One more thing to bear in mind when learning a selection of common Mandarin Chinese phrases is the tone. Mandarin Chinese has four tones. Each of the four tones, or the way the word is said, means the word is given a completely different meaning. The pronunciation remains the same – it is the raising and lowering of the tone on different syllables which distinguishes it.

Being able to introduce yourself in Mandarin is vital, especially if travelling to China on business. The people to whom you are speaking will see this as a courtesy, because you have taken the trouble to learn some common Mandarin Chinese phrases.

Finding your way around a Chinese city can be daunting at the best of times – even more so if you have not mastered a few common Mandarin Chinese phrases. A few of these phrases could save you time, money and effort if you are trying to get from A to B.

If you are travelling on business, picking up a few common Mandarin Chinese Phrases to help you go about your business will be useful. This will include trying to find internet access or a place to make a telephone call if you so need to.

These phrases will not cover every situation you will find yourself in, but they will certainly help to make yourself understood. And, although the language seems daunting at first due to its sheer complexity in the way it looks, like all languages, the more you use it the more you will learn.

A few common Mandarin Chinese phrases are the best way to start and build upon them by learning the responses people give to you. Wherever possible, people will help you, and if you cannot make them understand, show them in a phrase book. But most of all, do not give up.