Influence Of Spanish On Other Languages 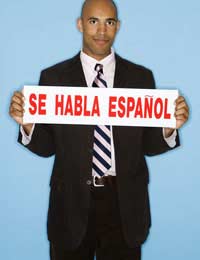 The influence of Spanish extends much further than other languages – it's influence is seen in other countries throughout the world. As one of the main Latin or Romance languages, Spanish inflections can be heard throughout the world. Spanish is a romance language and shares many traits with the languages of neighbours of Spain, such as Italian and Portuguese. It is even similar to French although to a lesser extent. But the influence of Spanish on other languages can be seen easily, in countries around the world.

Spanish has had a huge influence in the USA, particularly because of the numbers of immigrants of Hispanic origin who have moved to the USA. In fact, there are so many people living there now that Spanish is as widely spoken as English in many parts of the country. This obviously has had a knock-on effect on language among young people especially, with America English picking up many phrases and words from Spanish.In addition, years of links with both Spain and the Spanish speaking countries in Latin America to the south has meant American English has borrowed much from Spanish. States such as New Mexico have always been so linked with Spanish speaking countries that some crossover was inevitable.

In much the same way that the USA has picked up on cuisines from around the worlds, so have they taken bits of other languages for their English. Tex Mex and Cajun food styles both borrow from Mexico, Cuba and the other Spanish speaking countries to the south and this relationship is mirrored in language too.

One only has to look at place names across the country to see this relationship at work. In much the same way that the east coast is littered with British place names, New York and Boston being two of the most obvious, the west coast and south has plenty of Spanish place names such as San Francisco and Los Angeles.

Portuguese is the official language of Brazil, but because many of its near neighbours have Spanish as their languages, Brazilians are starting to use more and more Spanish words and inflections in their speech. Trade links, as well as proximity, mean that Brazilian Portuguese has to borrow Spanish words and phrases and that the influence of Spanish on other languages here is in evidence.

Spanish has had a massive influence on the Philippines and language in the Philippines. Although many people there now speak English, the legacy of Spanish is plain to see for all. Spanish was the official language in the country for almost all of its existence. And although there are almost 200 Philippines dialects and languages, Spanish loan words feature prominently in almost all of them, as many people still retain memories of Spanish passed down through the ages from the time of Spanish rule.

The influence of Spanish on other languages may not be as clear-cut as one such as French but no one can deny it is there. Spanish is one of the most widely spoken languages in the world, and with so many people speaking the language, there is no way it can avoid having some impact ion other languages. As Spanish in the USA continues to rise and American culture continues to dominate across the world, this influence looks set to grow even more.

Spanish Speaking Countries
Share Your Story, Join the Discussion or Seek Advice..
I have been teaching English since eighteen years ago, I would like to teach Spanish in country where English is the first language. I live in Venezuela. Is it possible?
chucho - 28-Dec-16 @ 11:57 PM
Spanish sucks. Spanish speakers are the most arrogant ever. They think that Spanish is such an important language, much more than it really is. There are 400mmillion speakers, sure, but they are all in 1/3 of the Americas. A language has to be spoken officially in every continent, and be economicallyimportant, to be consideredan important world language. Spanish is just a strong regional language. The only truly global languages are : English, /french and Portuguese. Yes, Portuguese! It is spoken officially in: Europe (Portugal, Azores, Madeira), South America (Brazil), Africa (Angola, Mozambique, Guinea Bissau, Cape Verde Islands, Sao Tome and Principe Islands, Equatorial Guinea), Asia (Macau, China), Oceania (East Timor). There are a huge number of Portuguese speakers in: India (Goa, Daman, Diu), Japan (Brazilian Japanese), France, Germany, Luxembourg, Andorra, England, Canada, USA, Argentina, Paraguay, Uruguay, Bermuda, Hawaii, Israel, Namibia, Senegal, South Africa, Malaysia, Australia, etc. There are also many Spanish speaking immigrant communities all over the world too, but, Spanish is not spoken officially on every continent like Portuguese, English or French is.
jj - 31-Aug-15 @ 12:23 AM
Title:
(never shown)
Firstname:
(never shown)
Surname:
(never shown)
Email:
(never shown)
Nickname:
(shown)
Comment:
Validate: