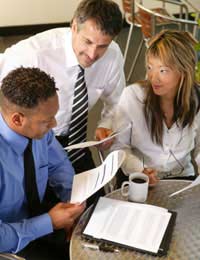 As the world grows metaphorically smaller more and more business is conducted between different countries. And once upon a time, it was just the translators, interpreters and big bosses who got to travel for work, but now most people will have some contact with other countries at some point in their lives.

It is for this reason that learning languages for work is becoming ever more important. Whether it is a few words to introduce yourself in person, more fluent greetings to have brief phone conversations, or in depth knowledge of the language to be able to send detailed emails, most people could benefit by learning a language for work.

French is the most commonly taught language at school and the one which most British English speakers know a few words of - at least enough to say hello and how are you. But as our nearest neighbour, and a major player in the EU, France is important to British business.

A few words of French, or more, learned for work could stand you in good stead when applying for jobs, as businesses are always on the lookout for people who can communicate effectively. And with French being spoken in Belgium, Luxembourg, Switzerland and Monaco, as one of these countries’ official languages, for inter-European business, French is a vital tool. And looking away from Europe, French is widely spoken elsewhere in the world. In Africa there are many countries that have French for their first language, and likewise the Caribbean. And not forgetting Canada, which has the province Quebec, which is French speaking.

Again, as with Europe, it is important for British businesses to do work with North America and so if you have to trade with Quebec, a French speaking employee will always be useful.

Mandarin Chinese, or indeed any form of Chinese, and Indian, may not seem like the most obvious choices when looking to learn a language for work. But over the coming years, the economies of both India and China are set to grow from strength to strength. These two countries are about to make a very big impact and any employee who has a few words of the language for work purposes is bound to be very highly prized indeed.

Both countries are already making their presence felt in the UK in major industries – one that springs to mind is the car industry. A Chinese company bought MG Rover’s old plant in Birmingham and the Indian group Tata, which extends far further than just motoring, is making waves as well. With such a once uniquely British industry being shaken up by these new world powers, it is only a matter of time before other industries are too. So if an employee can muster the necessary phrases in these languages for work, they will have a very important string to their bow.

Of course, there are practically infinite numbers of languages that will come in useful for work. And often, the language you choose to learn will depend on the line of work you are in. For example, if you plan to spend summers on the Mediterranean coast working on boats, then Indian will not take you far, while a smattering of Greek or Spanish will.

Depending on the level of immersion into business with another country, the business itself will help bring your language skills on. If you are simply doing phone or email business with another country, then you will have to push yourself harder to learn more words for work. But if you are visiting or even living in the country, you will extend your vocabulary and confidence simply be speaking the language every day.

Why You Should Learn a New Language

Learn a Language Before Emigrating